Yesterday morning, instead of working on editing my latest story—which is what I was supposed to be doing—I was overcome by the peculiar urge, which I occasionally have, to fiddle with some mathematics stuff that I find interesting, even though it’s not of any use or point to anyone.  I don’t tend to resist these urges when they happen, as I’m usually happy when I indulge them.

I’ve thought occasionally lately about how the differences between squares go up as the progression of odd numbers, which was (indirectly) noticed by Galileo regarding acceleration quite some time ago[1].  I’ve occasionally idly wondered if there were any interesting patterns in the differences in higher order progressions.  When I decided to play around with it, I thought to myself that everyone does cubes, so I decided to skip them and do a row of numbers to the fourth power.

Well, when I did the differences of the first several tesseracts[2] there didn’t seem to be much of a pattern.  They were all odd, but otherwise I couldn’t see anything remarkable.  They certainly weren’t all primes, which would have been cool.  I decided to do the difference of those differences to see if that was interesting.  Well, these were all even, which any differences of odd numbers are going to be, of course.  And, obviously, they didn’t get big as fast as the earlier differences.  But still, nothing obvious popped up.  So, I took another set of subtractions, and these became much more interesting, as they increased at a constant rate…each was 24 higher than the previous.  And thus, the next row of differences was simply a row of 24s, as you can see in the (slightly cleaned up) scan of my figuring here: 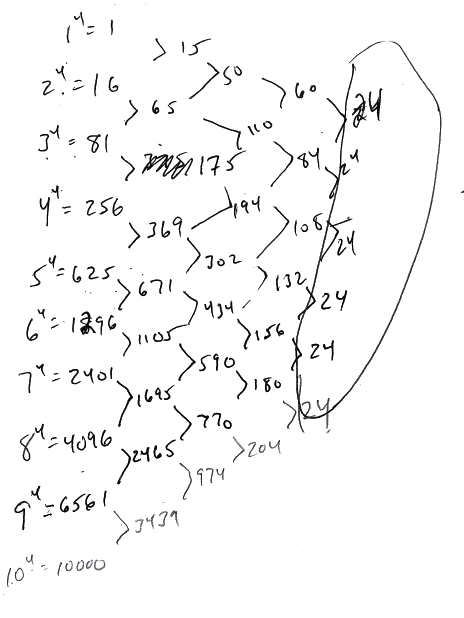 That intrigued me.  It was obvious that the difference of the differences of squares was always 2, since all odd numbers are 2 apart:

So, I wondered what the case might be for the cubes.  I went back to them, despite having initially skipped them, and began working along.  At first I became rather excited, because the first several differences of cubes were prime numbers: 7, 19, 37, 61, 91, 127…but then once I got to the difference between 83 and 73 it was 169, which is not prime.  Neither is 217, the next one (though the one after that, 271, is…assuming I didn’t make any arithmetic errors along the way, since at this point I was still doing my figuring by hand).  That was okay, I wasn’t looking at that, anyway, and it was just as well that I hadn’t started with cubes, or I might have gotten discouraged by that tantalizing hint of primes, only to have it disappear. 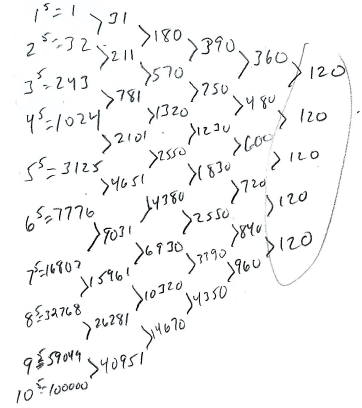 Well, being who I am, I had to at least try the next set, the sixth powers, and I most certainly used a calculator (well…the app on my phone) for those, since they become very large very fast, and there were way too many chances for errors to screw up my results.  I predicted, though, that, if the previous pattern held, then the final constant of the iterated differences of the sixth powers should be 2 x 120, or 720. 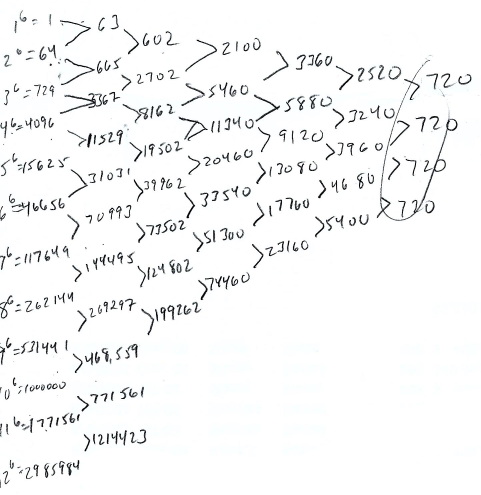 I wondered why this was the case, and whether it signified anything, but I had other things to take care of by that time, and so I let the matter lie and practiced guitar for a short while before beginning office work.

The pattern would continue, of course, with the final derivative of x7 yielding 5040.  If I were more intuitively and exhaustively mathematically literate—if I did this stuff all the time, for instance—I probably would have seen and known this pattern right away and wouldn’t have needed to do all this, but there is something special about just cranking through and doing the work yourself the first time and discovering the pattern after the fact.

Presumably, this is how most mathematical truths were discovered for the first time (and most of them without the use of calculator apps), and even though this stuff was probably something Newton knew when he was five, or perhaps came out of the womb already knowing and considering to be trivially easy, it can be great fun to play around with this stuff and figure it out for oneself, even obliquely.  And I suspect that doing things this way gives one a much more intuitive grasp of the math—a more “in your bones” sense of it, if you will—than just being told about it.  This is why students do exercises to learn their mathematics (and their physics and chemistry).

With that in mind, I’d like to give a special thanks and shoutout to Mr. Strachan, one of my high school math teachers, and I believe the person who would first have introduced the concept of the derivative to me.  I recall liking it well enough then, but I’ve come to appreciate it all much more over time, even though I don’t work with any of it professionally.  I wrote a paper (of all things) in Mr. Strachan’s class with a title something along the lines of “Mathematics:  The Fundamental Science and Order of the Universe”, echoing thoughts that had occurred to far greater minds than mine, from Pythagoras and Archimedes through Galileo and Newton and Leibniz and LaPlace, through to Einstein and Dirac and Schrödinger and Heisenberg and Eugene Wigner, who wrote of “The Unreasonable Effectiveness of Mathematics in the Natural Sciences”.

And though Sabine Hossenfelder rightly cautions us in her excellent, excellent book not to become “Lost in Math” when searching for explanations in natural science, it still is extremely useful—and it’s just a lot of fun, if you like that sort of thing.  Which I do.  So, thank you Mr. Strachan, and all my other math teachers throughout my life!

[1] This thought, had it been explicit on Tuesday morning, might have saved me time, but I’m glad it didn’t.  Sometimes it’s more fun to come at things the long way around.

[2] I figure if numbers to the second power are squares and numbers to the third power are cubes, then numbers to the fourth power are tesseracts.  I’ve never encountered anyone using this, but it seems obvious to me.  Unfortunately, for higher powers than that, I’m not aware of any potential terms, though I would welcome correction from any mathematically expert readers.

*I took the next few up, eleven to the sixth and twelve to the sixth without doing the difference because I wanted to see, just out of curiosity, whether the ratios of the differences of the numbers to the sixth powers appeared to be approaching any interesting constant like e or phi.  It wasn’t.

My Tweets
Iterations of Zero
Blog at WordPress.com.
Loading Comments...