Fans of The X-files will no doubt recall the poster on Mulder’s office wall, with its stereotypical picture of a flying saucer and the words, “I want to believe” written on it.

Well, I for one don’t want to believe.

Despite being a fan of at least the first four seasons of The X-files, I don’t want to believe.  It seems bizarre to me that, as a culture (as a species?) we have elevated the notion of belief as a good thing in and of itself, and we often respond to people based upon the strength of their belief, as though it were a sign of personal strength, as though it were something we should admire or even emulate.  We’re often told that we need to believe in ourselves*, that we need to find something in which to believe:  a religion, our nation, a set of ideals, what have you.  Rarely are we ever enjoined to question whether this is always a good thing.

Given, however, that humanity’s greatest strength—the attribute that sets us apart from the rest of the animal kingdom—is our ability to reason, it seems absurd that so many of us respond to, and even reward, those who accept the truth of propositions not adequately founded on evidence and argument.

I don’t understand this tendency, and I don’t think I really want to understand it.  To me, belief beyond the level justified by reason is not a strength—it’s not even neutral—it’s a weakness.  If your conviction doesn’t scale with the evidence, then you are, in a very real sense, deluded.  If your understanding of reality is out of sync with what reality is, then sooner or later you are going to collide with reality.  In such collisions, reality always comes out on top.  It can’t do otherwise; it’s reality.  I don’t just believe this; I’m thoroughly convinced of it.

Of course, at times I run afoul of the multiple meanings and connotations to the word “belief”, and I understand that this is a legitimate issue.  After all, when someone counsels others to “believe in” themselves, they rarely mean for them to believe without restriction or reservation.  They’re just advising people to have confidence in their own abilities—not to think that there’s nothing at all that they can’t do, but to recognize that they do have abilities, and can accomplish many things.  It’s hard to feel too critical about such advice, if it’s not carried it too far.  But even when we’re confident in ourselves—for good, sound, experiential reasons—it’s rarely good to believe that we’re the best in the world at everything.  It’s rarely even accurate to say that a given individual is the best in the world at anything.  If we can’t decide, from among a pool of a handful or fewer, who the world’s greatest basketball player is, then it’s pretty unlikely that there’s any one thing in the world at which any one person could readily be called the best.

I don’t want to believe; I want to be convinced by a body of reasoning, with my level of conviction always on a sliding scale, adjustable by new inputs of evidence and argument, and always—in principle—open to refutation.  If I’m not amenable to correction, I’m as much a victim of self-deception as a person who thinks he’s Napoleon.

I don’t really like to use the word “believe,” even in its more benign forms, such as when someone says, “I believe that’s true, (but I’m not certain)”.  I prefer to use such terms as “I think,” “I suspect,” “I’m convinced (beyond a reasonable doubt),” and “I wonder.”  When presented with a proposition that I consider highly unlikely, I like to use Carl Sagan’s polite but dubious phrase, “Well…maybe.”

In this, I’m much more in line with Scully than with Mulder.  I’m deeply skeptical of the whole panoply of paranormal perfidy such as that with which Mulder was obsessed, though I am open to being persuaded and convinced.  But I don’t want to believe, whether in the existence of the supernatural, or the rightness of certain political ideas, or in any religion, or in the power of positive thinking, or anything else without adequate support.  Faith, I think, is not a virtue, and I suspect that it never has been.  I’m convinced that doubt, reasonable doubt, is the virtue.  If that means that I’ll go through life never experiencing the untrammeled confidence of the true believer, that soaring, absolute conviction that I am on the side of right, and those who oppose me are not…well, good.  I’m sure non-sanity of that sort has its moments of joy, but I think I’d prefer skydiving or free solo rock climbing.  Those activities would be dangerous to myself, but at least they’re unlikely to endanger anyone else.

Belief is dangerous, because when it collides with reality, the believer is quite often not the only casualty of the collision.  Often the results are explosive and cataclysmic.  So I don’t want to believe.  And I really don’t want you to believe, either. 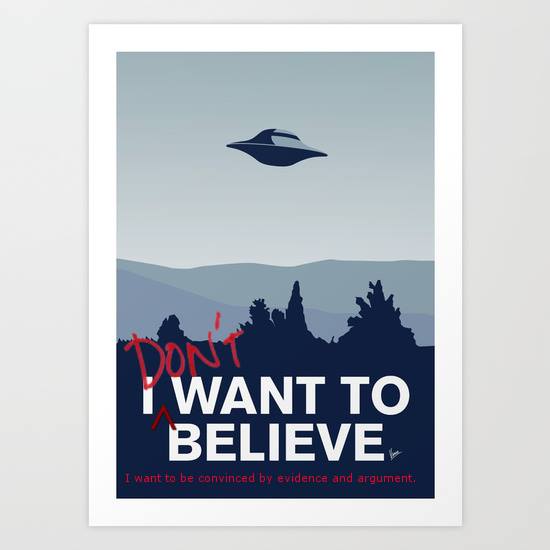 *this is perhaps the least objectionable form of belief, but it can still be problematic, as the personality disorders of some public figures shows.