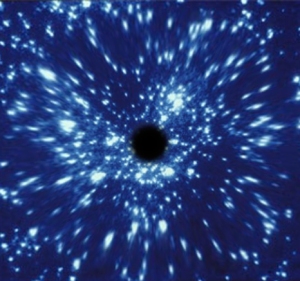 A very old friend of mine—that is, one I’ve known a long time, he’s no older than I am, and I hope I don’t yet count as “very” old—suggested that I write an article about what exactly black holes are. So, I thought about it, for all of about two seconds, and realized that black holes would be a great topic for a general science article.

So, what are black holes? Well, in their most common form, black holes are the final remnants left behind after the deaths of the most massive stars. You see, during their ordinary, active lifetimes, stars are at a constant balance point between the force of gravity that tends to make them contact, and the force created by nuclear fusion and its consequent heat, that makes them tend to expand. This balance is maintained for a very long time…though interestingly, the length of time is inversely proportional to the size of the star. That is to say, the bigger the star is, the shorter its lifespan.

Sooner or later, though, every star will run out of its nuclear fuel and won’t be able to provide enough internal heat to keep from collapsing further. There’s usually a sort of contraction and expansion phase as stars get near this stage, and it’s during these times that especially the bigger stars start fusing heavier and heavier elements…but that’s really an issue for another article entirely. In any case, when a star runs out of usable fuel and gravity is no longer opposed by fusion, the star collapses. In some stars this collapse is so powerful and releases so much energy that a “supernova” occurs, a HUGE stellar explosion, where a lot of the star’s matter gets shot back out into interstellar space. This is how every element we know of other than hydrogen, helium and lithium came to be.

Now, depending on how big the star is to start with, when it collapses it will have one of only a few possible fates. Since gravity is dependent on the mass of the star, smaller stars will have less of a contracting force, and they—as our sun is expected to do—become white dwarfs. Gravity shrinks them down until their individual atoms are only separated by the quantum mechanical forces between the electrons (not the electrical repulsion, but the simple resistance electrons have on a quantum level to being too close together). This is about as densely packed as atoms can get and still be atoms. Our sun will probably shrink until it’s about the volume of one of its rocky inner planets like the Earth…although the Earth will almost certainly have been incinerated by the sun before that ever happens. Still, you get the idea.

A star that’s maybe two times the mass of the sun will have enough gravity that the electron forces won’t hold it up. Only the nuclear forces will be strong enough to resist this much gravity. These stars are among the ones that become supernovas, in part because of the tremendous energy released in this collapse that overcomes electron repulsion. The gravity of these stars is so huge that it squeezes the former atoms all in on themselves, sort of mashing the protons and electrons together and creating a huge ball of neutrons…a neutron star. This is about as dense as matter can get in a form that we can recognize as being made up of any kind of individual particles. What you’re left with after this collapse amounts to a single gigantic atomic nucleus…though without any protons and an unthinkably large atomic mass. It’s so heavy and the gravity is so huge that any human—or indeed any other unfortunate entity of normal atomic constituents—would be squashed immeasurably flat on its surface.

It would at least be a pretty fast death though.

Now we come to stars that start out at about three times the mass of our sun or more. When these star collapse, there’s nothing even nuclear forces can do to resist the gravity, and in fact, no known force can resist the collapse. These stars become black holes.

There’s a bit of trouble in describing what really goes on inside a black hole. According to general relativity, the mass of the star becomes compressed to an infinitesimally small and infinitely dense point called a singularity. Now, scientists are pretty sure this isn’t exactly accurate, since infinities are usually not literally achievable within the universe as we know it. Also, a truly infinitesimally small concentration of matter would violate the Uncertainty Principle, which is a law of nature that seems every bit as immutable as gravity. So here in the heart of a black hole we arrive at the notorious point of conflict between general relativity and quantum mechanics. I’m not going to try to explain how that conflict is to be resolved, because so far no one knows.

One reason why it will be hard to resolve this conundrum is because black holes are, well…black. The reason they are called black holes is because when gravity is that strong, even light can’t escape it. Yes, gravity effects light, though for anything short of a black hole that effect tends to be unnoticeably tiny. Yet the principle of why a black hole is black is fairly simple. It has to do with escape velocity.

Escape velocity is a measure of how fast something has to be going when leaving the surface of a body such as a planet or a star or a galaxy in order for it to fly completely away from the body and not remain at least in orbit (or come crashing back down on the head of the people below). From the surface of the Earth, you’d have to throw something upward with a speed of about 7 miles a second (ignoring air resistance) to keep it from coming back down or getting stuck in orbit. That’s pretty fast, but it’s TINY compared to the speed of light (about 186,000 miles per second).

Then again, the Earth is also really tiny, on the scale of stars. A very large star that has collapsed completely can have a gravitational pull so powerful that its escape velocity is greater than the speed of light. Well, so far as we know, light is still the fastest stuff in the Universe (rumors about neutrinos notwithstanding), so if light can’t escape from that gravitational field, then NOTHING can. That’s why black holes are black.

The blackness of black holes doesn’t just stick around right at that tiny point called the singularity. The gravity is strong enough that any light—and thus anything else as well—that gets closer than a certain distance to the singularity will never be able to escape. That distance from the center of the black hole defines a sphere of inescapability called the Event Horizon, or just the Horizon. This is a good name, because the horizon on the surface of the Earth is the point you can’t see past because of the curvature of the Earth, and the Horizon of a black hole is the point no one and nothing can see past because of the curvature of space-time (in other words, gravity). The size of the Horizon of a black hole is based simply on its mass. As more matter falls into a black hole, the horizon grows…though what exactly happens to the singularity in the center is unknown, and may remain so forever, since even in principle there’s no known way to get information from inside an event horizon.

Though they are all very similar in character, black holes come in a lot of different sizes (by which I mean their masses and the areas of their event horizon are different). There are “ordinary” black holes that are the remnants of large stars. There are also “super-massive” black holes, believed to be at the center of most galaxies—including ours—and which have the mass of millions or even billions of suns.

Theoretically, there may also be very small black holes with the masses of mountains, which might have been formed during the early Universe by the enormous pressures associated with the big bang. These black holes wouldn’t so much have collapsed as have been squeezed inward, and they wouldn’t have to have a very huge amount of matter. Yes, you can make a black hole that way. Well, YOU can’t, and I can’t but it’s theoretically possible, though not demonstrated. Still, some relatively small black holes could still exist out in the Universe, remnants of the tremendous forces unleashed when the Universe began.

There even could be submicroscopic black holes created by VERY energetic collisions of fast-moving particles, as in very large accelerators or in cosmic ray collisions. These would be black holes whose Horizons are on the size-order of subatomic particles. These are nothing to worry about, by the way, because—and this is something many people don’t know—black holes don’t last forever. They have a limited lifespan due to a quantum mechanical phenomenon called Hawking radiation (yes, it’s named for THAT Hawking). This describes the fact that all black holes are actually radiating particles and photons from just outside their Event Horizon. I’m not going to go into how that works right now (it’s not all that difficult to understand, but it would take quite a bit of explaining), but it means that the mass of a black hole does go down over time and eventually it will disappear, like water boiling out of a pot. What’s more, the smaller the black hole is, the faster it evaporates. Any black holes made accidentally—or deliberately—in particle accelerators would be so small that they’d evaporate before we could even directly tell they were there. Such black holes may pop into existence in the upper atmosphere every day…many times a day…when highly energetic cosmic rays hit the earth. So don’t freak out about CERN making a black hole that would swallow up human civilization. If that was going to happen, it would be happening several times every day at least, in the sky above our heads.

Well, I hope this article answers at least some questions about what black holes are, as well as giving some related and interesting information. I’ve left out a lot, but I know I’ve also covered things at a bit of a breakneck pace. If there’s anything that’s unclear or confusing, please let me know. I’m happy to receive constructive criticism on this most destructive of topics.

And to my very old…well, to my “long-time” friend who suggested this article: I hope you found it helpful.